People's lifestyles and the way they conduct business have diversified to a considerable degree in recent years. Along with this trend toward greater diversification, the need to communicate easily within short distances became more pronounced. Consequently, the demand for radiocommunication in relatively limited service areas has been steadily increasing which prompted the development of the Specified Low-Power Radio Station system to meet there needs. This system opened up a way for the general public to take advantage of radiocommunications. Under this system, users can use radio for communications without having to quality as radio operators and without a radio station license. All that is necessary is to see that their radio equipment meets the requirements laid down in the system. For this reason, after the system went into operation, it became possible for a greater number of people to use radio as a means of communication.

As two examples of how the specified low-power radio station is used, we would like to ate the "Radiophone Used as a Voice Assistance System" and the "Mobile Detection Sensor."

The Radiophone Used as a Voice Assistance System

A barrier-free environment, in which physically challenged and elderly people can use various facilities, public transportation systems, and sidewalks safely in comfort without inconvenience to ensure that they can fully participate in society is required. Among those physically challenged, particularly, blind people have difficulty in obtaining necessary sensory information when moving around.

The Radiophone used as a Voice Assistance System is a type of "guide by voice" providing information by voice especially to persons with mobile receivers. Suitable places for system iunstallation will mainly focus on public buildings such as city offices and libraries. 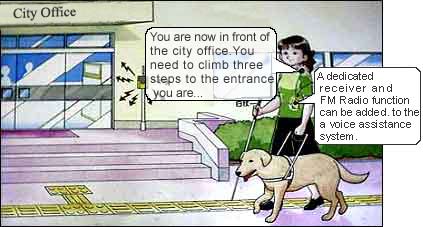 In recent years, the need for a barrier-free environment and a crime prevention system to ensure the safety and comfort of the elderly have been promoted. Also, there has been an increasing demand for a radio sensor which is technologically advanced and easy to handle. The demand for a Mobile Detection Sensor, which uses a microwave band, has been quite strong. The reason for this demand lies in the fact that the Mobile Detection Sensor has superior characteristics when compared with detection sensors utilizing infrared radiation or supersonic waves. The microwave band sensor is also simple to install.